Stuff on my cat. 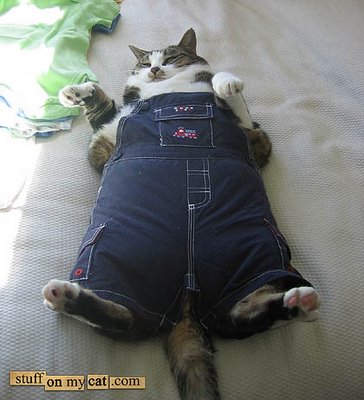 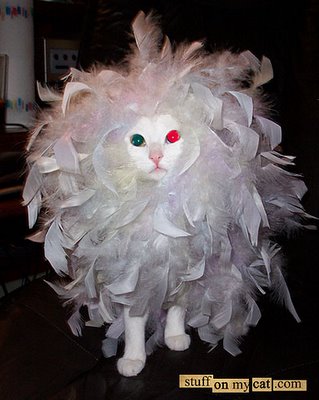 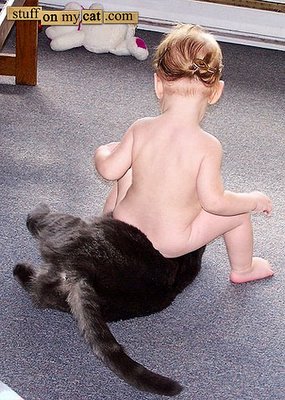 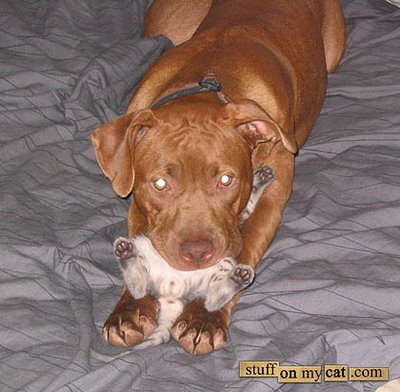 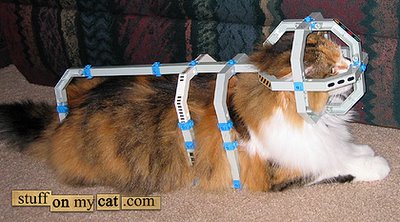 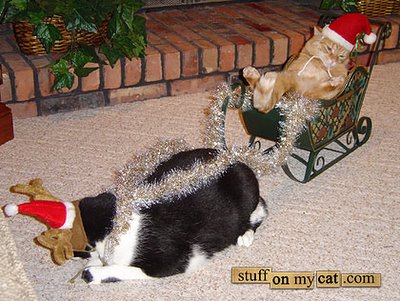 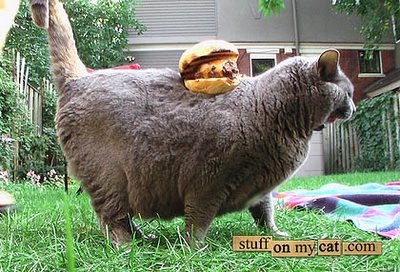 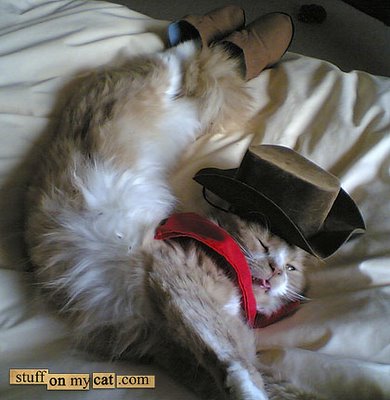 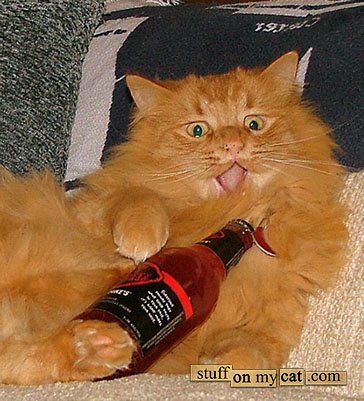 Posted by Stupid at 3:39 PM No comments:

Pose With Your Toaster 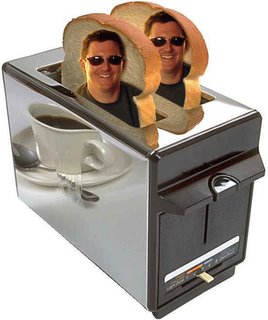 Like many of you, we've seen the Mercedes-Benz commercial, "No One Ever Poses With Their Toaster." And, also like many of you, the first thought that occurred to us is, "This makes me want to pose with my toaster!"
Why, haven't you ever thought, "I wish there was a web site that would post my toaster picture and then someone could rate my toaster picture!" Of course you have. We all have. And now, your wish has been granted!

Posted by Stupid at 1:29 PM No comments:

Can you get much cuter than this? Panda kindergarden webcast

The school at the Wolong Giant Panda Breeding and Research Centre in China's Sichuan province is the first of its kind.

Five female and 11 male baby pandas will spend at year living there, away from their parents.

The centre hopes a taste of independence and group play sessions will help develop their social skills so they'll find a mate more easily.

A low reproduction rate is a prime reason the panda population is threatened.

A range of fashion clothing for chickens has been launched by a group of designers working in Austria and Japan.

Austrian Edgar Honetschlaeger said he decided to work with the Japanese on the project because he hoped to make the chicken label clothing essential.

He said "It's something that you don't really need but everyone wants to have anyway."

He is promoting the range on his website, www.chickenssuit.com, and a fashion show is now touring the world.

Several farmers have already had chicken suits with the name of their farm ordered and many advertisers have enquired about the possibility of having sponsored suits promoting everything from KFC to chicken soup.

The chicken suits come in various sizes, and had their first presentation in the Austrian pavilion of the World exhibition in Nagoya, Japan, where 20 chickens paraded a catwalk with Mozart music playing in the background.

The chicken suit collection will continue its world-wide tour with shows planned in Tokyo, Paris, Mexico City and Vienna.

The shoes were designed to prevent burning pads and cuts and to comfort hip dysplasia during walks and sporting activities. They also protect against injury from dragging paws. The shoes offer shock absorption and prevent dogs from slipping on icy or wet surfaces as well as hardwood and tile floors.

Posted by Stupid at 3:25 AM No comments:

In January 2000, an oil slick off southern Australia threatened the Phillip Island breeding stock of the world's smallest penguin. The little, of fairy, penguin stands 18 inches tall and weighs a little more than 2 pounds. The oil rendered the penguins' feathers useless against the cold.
Menbers of the Tasmanian Conservation Trust came to the little penguins' aid, capturing and cleaning them. During the birds' rehabilitation, the rescuers relied on wool to insulate them and keep them from preening their feathers and ingesting residual oil.

To inspire community support, the Trust published a knitting pattern for penguin sweaters in a national magazine. Thousands of tiny woolly jerseys were specially knitted and sent from as far away as Japan. For the fashion-conscious penguin there is a wide choice of colors and designs, even a black and white tuxedo number, complete with bow tie. The pattern is based on one used for penguins in the northern hemisphere, only smaller. It was re-designed for the little penguins in the southern hemisphere. Many older ladies in nursing homes made jerseys in their favorite football team colors and used scraps of wool to make patchwork tops. The jerseys will be kept in case they are needed for future oil spills.

Posted by Stupid at 2:04 AM No comments: 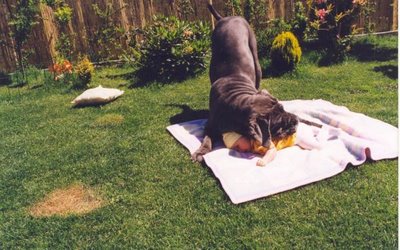 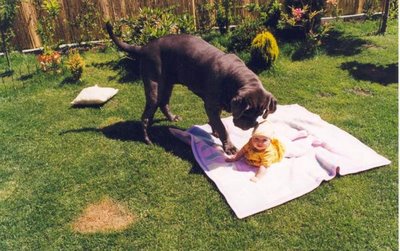 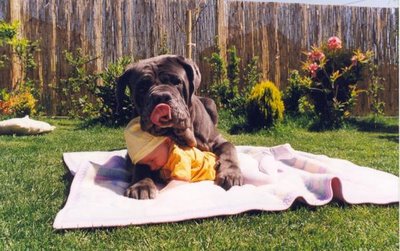 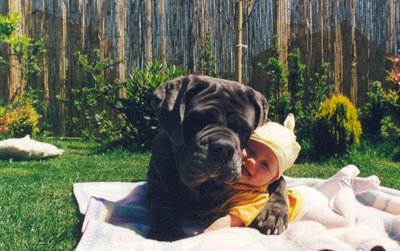 [technorati tags: email, forwards, dogs, kids]
Posted by Stupid at 1:12 AM No comments:

You go to a bar. Music is too loud. Cell phones going off all around you. Some guy is standing next to you screaming. You know what we are talking about, right? How about a refreshing change of pace? Come to the Quiet Party. No loud music, no yelling, no cell phones and one designated area where there is no talking AT ALL!!

The Quiet Party is a totally unique experience. Inside the silent room we provide paper & pencils. Pass notes around - be mischievous, have a little fun, meet some new people!

Posted by Stupid at 1:10 AM No comments: 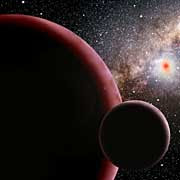 Somewhere deep in space, 9,000 light years away from our beloved source of light and the ball of flaming gas we call the sun, the good folks at NASA have found a planet with a very similar chemical composition to our own, so much so that it is being touted by the media as “Super Earth”.

The celestial body in question, with roughly the same mass as Neptune, was discovered by scientists working on a new project they call OGLE, short for Optical Gravitational Lensing Experiment.

It works by measuring the light coming in from distant stars and looking for changes. When a massive object, such as a star, passes in front of another object, the passing object’s gravity bends the light from the background star and magnifies it like a lens so that it appears brighter. This newest discovery, brought about by the revolutionary technique, is forcing scientists to revise their calculations on how many possible Earth-like planets there may be in the universe.

“It appears to be a terrestrial planet of rock and ice. The implication is that these icy super-Earths are pretty common.” said Andrew Gould, professor of astronomy at Ohio State University.

This is only the latest announcement in a string of space related news. The human race is slowly, step by step, conquering the final frontier. We have found traces of life on an icy moon, begun the process of mapping Mars, and now discovered a planet that has challenged the thinking of scientists everywhere. The big question is whether or not (or when) we will find life somewhere out in the unknown blackness of space.