Truly the most mystifying and inspiring monument in history, archeoastronomy, and architecture, Stonehenge stands today as witness to the indominatable human spirit and our collective quest to forever mark our place on this planet, in the universe and in time.

So take "A Great Leap Backward in Time" with The Stonehenge Watch!

Some may call it a sundial.

Posted by Stupid at 9:49 PM No comments: 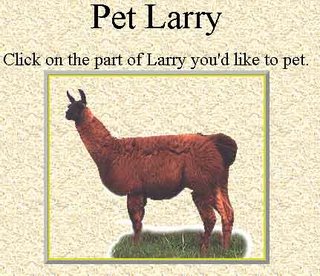 Designed to aid in the daily prayer, meditation and growth of a strong spiritual relationship with Christ.

In-Souls™ inserts are designed to provide a tangible support to assist Christians to literally "walk in the word of the Lord." Worn in the right shoe, each one provides a related scripture and affirmation. To enhance the spiritual walk with God, the inserts help one to "stand" on His Word, meditating on it day and night. Inserts may be alternated daily to help cultivate the word of God in your life. Look for other In-Souls sets to cover a variety of topics – from trust, obedience, patience and redemption to marriage, work and body image.

Posted by Stupid at 4:09 AM No comments:

Death AND a fine

Posted by Stupid at 3:11 AM No comments:

A street entertainer was arrested for obstructing the road after impersonating a Formula 1 car.

David Honan, 32, said shoppers in York were enjoying the act which sees him running around pedestrians in a Ferrari cape, holding a steering wheel.

But officers said they acted after he ran into the road causing two cars, including a police car, to brake hard.

Mr Honan, who was cautioned, said: "It's ridiculous. I have never been in trouble with the law before."

Mr Honan, who runs his own street theatre advertising company, had been working for a Formula 1 shop in the city when he was arrested.

He had been making car noises and zooming about in between shoppers when he saw a car inching around the corner.

Mr Honan told BBC News: "I trotted in front of one which was going at tortoise speed because it was going through the crowd. It was getting lots of laughs.

"I was making all the noises. Then I felt a hand on my shoulder and this police officer spun me around - he was so angry."

Mr Honan said he was arrested, taken away in a police car and locked up for two-and-a-half hours.

He said he accepted the caution rather than attempting to fight the charge in court.

A North Yorkshire Police spokesman confirmed that a man was arrested on Saturday for obstructing the highway.

"He ran out into the road causing two cars - one of them a police car - to slam on their brakes," he said.

"York has some terrific street performers and we enjoy them as much as anyone else but there is a line to be drawn when it comes to safety."

The Formula 1 shop that Mr Honan advertises told BBC News he did "a fantastic job".

Asked if he would carry on in the role, Mr Honan said: "If they ask I'll do it again. I'll just be checking my rear view mirror every five seconds."

Posted by Stupid at 2:22 AM No comments: 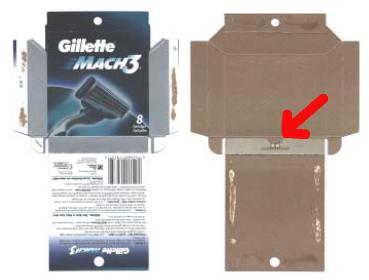 It seems Gillette have been doing it for a couple of years.

Gillette has been caught hiding tiny RFID surveillance chips in the packaging of its shaving products. These tiny, high tech spy tags are being used to trigger photo taking of unsuspecting customers!

The tracking system uses sensors hidden under Gillette shelves to detect when products are picked up.
Whenever a shopper picks up a packet of razor blades from a spy shelf, SNAP! A hidden camera secretly takes a closeup photo of the shopper's face. (And a second photo is snapped at the cash register to make sure the product is paid for!)

Gillette's spy shelves have been uncovered in England and we suspect they have been tested at various locations around the United States and other countries.

The Gillette spy shelf and the associated hidden camera application were developed at the MIT Auto-ID Center, during the time that Gillette VP Dick Cantwell was the head of the Center's Board of Overseeers. This industry consortium has produced documents, pictures, and video promoting the use of Gillette "smart shelves" to take secret photos of unsuspecting customers.
[technorati tags: surveillance, chips, gilette, stupid]
Posted by Stupid at 12:57 AM No comments:

A German who persuaded doctors to give him a second penis has lost his wife after he showed her the result.
Biker Michael Gruber, 40, lost his original penis in a motorbike accident and doctors built him a second one using a mixture of skin, bone and other tissues from his own body.
The penis worked so well that he was even able to father a child with his wife Bianca, 25, and their son Etienne was born last year.
But Gruber was still not happy and asked doctors to repeat the operation and build him a better organ, to which they agreed.
However, before removing the first penis doctors said they needed to make sure the new tissue transplant was a success, and had to leave the first penis in place.
Dr Markus Kuentscher, a plastic surgeon at Berlin's Accident Hospital, said: "We left the old one attached until the new one is properly supplied with blood."
But when Gruber showed his wife his double penis, she went home, packed her bags and left.
From his hospital bed he said: "I've got two penises but no wife, but I am hoping when I get rid of one of the penises I will get her back."
His testicles are intact and will be connected to what is actually his third penis when doctors are happy the operation was a success.
His story was this week featured on a German TV documentary called The Last Penis Operation.
[technorati tags: penises, wife, transplant, operation]
Posted by Stupid at 12:44 AM No comments:

sometimes you come across certain individuals and the first word that comes to mind is "idiot"...here are two i came across recently... 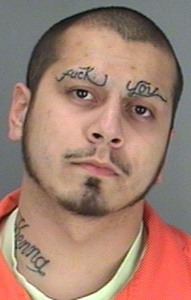 this guy isn't an idiot because he's on his way to jail...i call him an idiot becuase he has "fuck you" tattoo'd on his eyebrows...what inspired that i wonder? i always say that if you're gonna get a tattoo make sure its not something you're gonna be embarrassed to have later in life...like when you're 50 or 60...but for some odd reason i kinda doubt this guy is gonna make it to his golden years... 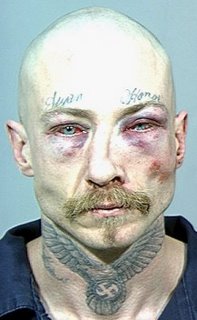 this guy isn't an idiot in my book because of his stupid aryan tattoos (well, i guess he is now that i think about it)...this is another guy on his way to jail and he decided it'd be fun to resist arrest...the bruises on his face are courtesy of whatever law enforcement officer(s) he thought it was a good idea to take on. i get the impression that with a nose like the one this guy has he's been in a fight or three in his time and more often than not he gets his ass kicked pretty good...you'd've thunk by now he'd know when to fight his battles and when to be a nice, passive little hitler wannabe...apparently that lesson was lost on this idiot...

btw...pic are courtesy of the smoking gun...

Grow your own beer.

You don't need to have a full beer garden. As you can see here , beer can also be planted in an ordinary vegetable garden.


IN YOUR OWN BACK YARD--Everyone loves the taste of fresh beer. But we don't all have the time, the space, or the know-how to grow our own alcoholic beverages. And with liquor outlets on practically every street corner, it's always been easier to pick-up a six-pack of Molson Canadian from your neighbourhood cold beer and wine store than to make that effort to plant your own. People will generally buy bottled beer out of convenience, but there is nothing quite as satisfying as the sweet nectar grown from your very own beer garden. And you should know that starting your own beer garden is as easy as a trip to the liquor store.
Grow your own beer.