This is a really a product for disabled people that needs to go places on their own where a traditional wheel chair ain’t good enough. It looks awesome, doesn’t it?

“It took me 2 years and I tried everything I could think of. Pneumatic tires, bigger wheels, stronger motors, and my favorite, a hellish jet ski/snowmobile looking thing with wheels. The last one was ugly, expensive, and will make someone a strong anchor. My father-in-law was in my garage one day and I was complaining about my latest plight and he said, “Wouldn’t it be neat if you could put some tracks on it? Like a tank?”

Sit right in your own Library - The Bibliochaise 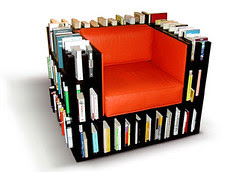 It contains 5 linear meters if books. 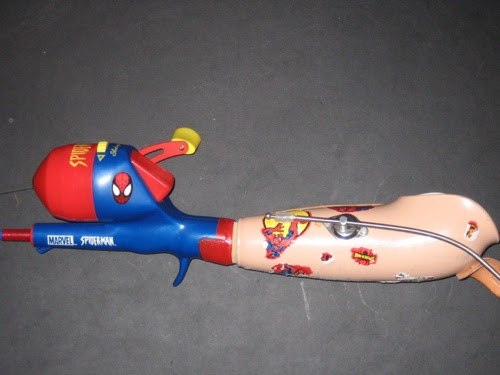 This Dad is a hero!

Robert Haag has put together an amazing Spiderman fishing pole / prosthetic arm for his young son. It's part of the "Open Prosthetics Project," which aims to share ideas and inventions for prosthetic devices.

Watch a video of the kind using it. 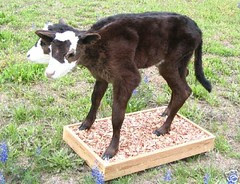 Tucows should buy this for their headquater lobby :)

This calf was born in our hometown, Grapeland Texas. It was brought by a local farmer to our Taxidermy Studio, The Sportsman's Memory Shop. We have been in the taxidermy business for over 25 years and have won numerous awards for our taxidermy work.

This is only the second two-headed calf that we have mounted. The first one was 15 years ago, and it was sold to Ripley's Believe It or Not, in Florida. This is a very unusual find and freak of nature. This will be a great conversation piece for any room or museum display.

Keep in mind that this is an actual two-headed calf that we have mounted. This is not a taxidermy fake. 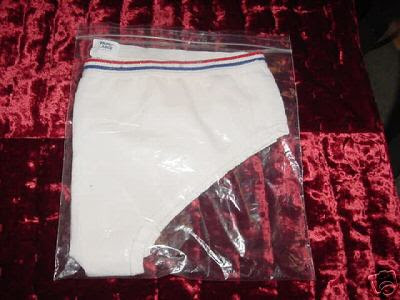 Find out, because you can auction some tighty whities which the King actually wore. Well actually sorry to dissapoint you ... they got washed... Ebay policy!

THIS IS ONE OF THE MOST UNIQUE & RARE ELVIS PRESLEY ITEMS EVER OFFERED ON EBAY. THIS ITEM HAS NEVER BEEN OFFERED FOR SALE UNTIL NOW. YOU ARE BIDDING ON A PAIR OF ELVIS PRESLEY WORN UNDERWARE, HE WORE UNDER HIS JUMPSUIT WHILE PERFORMING. ELVIS PRESLEY IS THE KING OF ROCK AND ROLL, AND NOW YOU CAN OWN A PIECE OF MUSIC HISTORY.

THESE HAVE BEEN STORED FOR QUITE SOME TIME NOW, I DON'T WANT TO PART WITH THEM BUT MY WIFE IS MAKING ME GET RID OF THEM. I HAVE A HAND SIGNED LETTER DIRECT FROM SONNY WEST, EXPLAINING EVERYTHING, AND ITS ON TAKING CARE OF BUSINESS STATIONARY WITH THE GOLD FOIL, THIS WOULD BE THE ULTIMATE ADDITION TO ANY SERIOUS ELVIS COLLECTOR, THIS IS THE REAL DEAL. 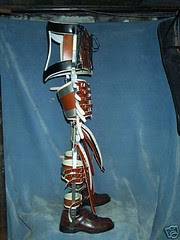 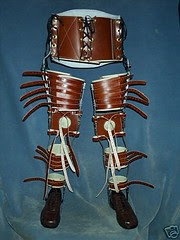 Not sure if I should think there is something sexuell is going on with this auction .... hmmm ... thinking...thinking .... NO, it is not sexuell at all, at least for me!

THE PICTURES OF THE BRACES IN THIS AUCTION ARE AN EXAMPLE OF WHAT YOU ARE BIDDING ON. THE WINNING BIDDER WILL NEED TO SEND ME A TRACING OF THEIR LEGS AND TAKE SOME MEASUREMENTS. I WILL FABRICATE A CUSTOM PAIR OF HKAFO’S LIKE THE ONES SHOWN IN THIS AUCTION.

THE WINNING BIDDER WILL NEED TO SUPPLY A PAIR OF SHOES THAT FIT THEM . I HAVE INCLUDED PICTURES OF THE JOINTS THAT I WILL BE USING IN THE BRACES. ALL OF THE MATERIALS USED IN THESE BRACES ARE MEDICAL GRADE. THE CUFFS ARE MADE OF GOLDEN RUSSET LEATHER AND LINED WITH CREAM NAUGAHIDE. THE KNEE JOINTS ARE STAINLESS STEEL TRIGGER RELEASE JOINTS THAT SNAP INTO EXTENTION AND RELEASE WHEN THE TRIGGERS ARE PULLED UP.

THE ANKLE JOINTS ARE DOUBLE ACTION STAINLESS STEEL JOINTS THAT CAN BE ADJUSTED TO FLEX OR EXTEND THE FOOT. THE HIP JOINTS ARE STAINLESS STEEL AND HAVE DROP LOCKS THAT ENGAGE WHEN YOU STAND UP. THE DROP LOCKS HAVE RETAINING BALLS TO HOLD THE LOCKS IN THE UNLOCKED POSITION UNTIL YOU WANT TO LOCK THEM THEY ALSO HAVE A DIAL ADJUSTMENT TO ALLOW THE WEARER TO SET THE HIP FLEXION WHERE IT FITS BEST. ALL OF THE SIDE BARS ARE MADE OF AIRCRAFT ALUMINUM EXCEPT THE BARS ATTACHED TO THE HIP JOINTS ARE STAINLESS STEEL. THE STIRRUPS ARE MEDICAL GRADE STAINLESS STEELMY NORMAL PRICE FOR THESE BRACES IS $2500.00. OTHER BRACE SITES ON THE WEB CHARGE $3600.00 AND UP FOR BRACES LIKE THESE.

I AM DOING THIS FOR A PROMOTION OF MY SOON TO OPEN WEB PAGE. I WOULD APPRICIATE AN E-MAIL FROM THE WINNING BIDDER LETTING ME KNOW HOW THEY LIKE THE BRACES , TO BE INCLUDED ON THE NEW SITE. THANKS TO ALL OF THE PEOPLE WHO HAVE INQUIRED ABOUT CUSTOM BRACES. THIS IS YOUR CHANCE TO GET THE BRACES YOU WANT AT A GREAT PRICE. I HAVE SET MY RESERVE AS LOW AS I CAN. 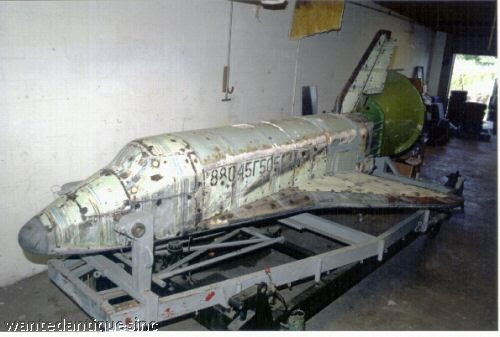 The BOR-5 Space Shuttle, first seen by the public in April 1991 at the "To The Stars" exhibit in Moscow, is a truly uncommon piece of history that is genuinely unique and exceptional. A collector's dream.

One of two remaining Shuttle prototypes used by the Soviet Space Program to test the design of the BURAN Space Shuttle. Own a piece of the PAST, PRESENT, AND FUTURE with this amazing example of the "Cold War Space Race."

The BOR-5 is a 1400 kg exact 1/8 scale model of the Soviet space shuttle Buran. The BOR-5 is 15'6" Long (17' w/trailer) X 9'10" Wide (wingtip to wingtip) X 5'10" Tall (8'10" Tall on trailer). It was used to validate the aero-dynamic characteristics of the Buran at hypersonic speeds, between 1983 and 1988. The BOR-5 was launched on probably five sub-orbital trajectories from Kapustin Yar, in the direction of Lake Balkhash, using SL-8 (Cosmos) rockets (Russian designation: K65M-RB5). BOR is the abbreviation for Bezpilotnyy Orbitalnyy Raketoplan (Unmanned Orbital Rocketplane). BOR-5 flights tested (amoung other things) carbon-based and quartz fiber heat-shield material paving the way for the Buran Shuttle.

Russian sources are contradictory as to the number of BOR-5 flights. An except from one report reads: " ... At an approximate altitude of 110-120 km height, the Cosmos booster pitched down, driving at full thrust for several minutes, accelerated the model to Mach 18.5 at 45 degrees, before separation. The craft landed using a parachute landing system after a flight of 2000 km.

LINK to the Auction.

Nono turns Air Sickness Bags in things you can use 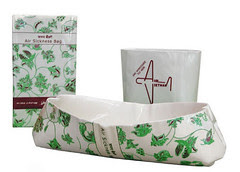 I am not sure if they just fly a lot and snatch those bags (Air India, China Eastern, Air Vietnam and Thai Airways) but to tell you the truth I don't care as long as the bags are not used.

They turn the bags in to bowls for peanuts and vases. 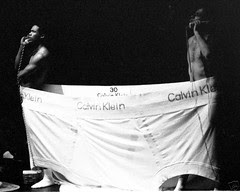 This theater prop was created by the famous costume designer, David Baca (Bette Midler's mermaid costume, etc.) for the 1990 stage production of Forbidden Planet. Used in the scene, Risk Trading, in which Calvin Klein and Perry Ellis wake up in bed together (the underwear) and negotiate contract points over their phones for an intimate encounter.

The underwear is hand-made, with true elastic waistband and reproduced in giant scale from an actual pair of Calvins.

This pair has travelled around the world and was last publically exhibited in Bangkok, Thailand.

It would make a perfect bed cover, tent, centerpiece for your next underwear party, or the perfect gift for the Jolly Green Giant.

We have not washed the underwear (because some people may like it that way), but feel free if you are the lucky high bidder on these pair of "widey whiteys". 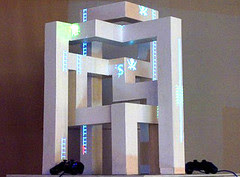 Stupid thing is that the controllers have cables, so while you circeling around you get tangled up and fall over!

The real challenge comes, not from traditional game mechanics but rather from moving with your character as he sprints around corners and jumps between the installation’s two play surfaces.