Dogblog - A blog about dogs tied to things. Ordinarily I'd say something about these two being possibly related, but I can't get past the eyes on the right-hand one. Maybe it's just my monitor settings, but I never knew dogs could be goth.

Or maybe I did. Maybe I secretly knew, inside, all along.

A blog about dogs tied to things.
[technorati tags: dogblog, dogs tied]
Posted by Stupid at 11:00 PM No comments:

A Gadzillion Things To Think About

# Why can't they make newspapers that don't smudge? (Contributed by Don F.)

# Is it possible for someone to write an unauthorized autobiography? (Contributed by Don F.)

# Why does "X" go first in Tic-Tac-Toe? Why can't "O" go first for a change? (Contributed by Kenneth Mack)

# Why is it that moments after you sell something through newspaper classifieds you get five calls from people who swear they would have bought the item you just sold for triple the asking price? (Contributed by Kerry Diotte The Edmonton Sun)

# Why no matter what happens in one day the news fits perfectly into the newspaper? (Contributed by Don F.)

Posted by Stupid at 9:52 PM No comments:

Montage-a-google is a simple web-based app that uses Google's image search to generate a large gridded montage of images based on keywords (search terms) entered by the user. Not only an interesting way of browsing the net, it can also be used to create desktop pictures or even posters
Image montage.

Posted by Stupid at 8:51 PM No comments: 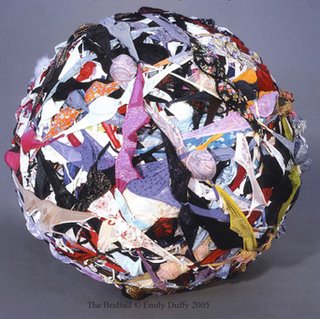 But is it art?

Posted by Stupid at 6:59 PM No comments: 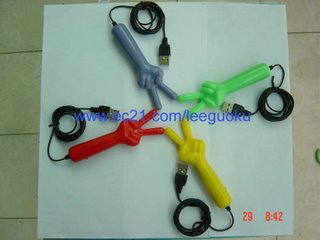 USB Eye Massager is the latest-designed health care Product specially for the Person which long time use their eyes, Such as the Computer operator. The product could relax the stress of the Eyes. and make your whole body in the situation of the unstressing by the product vibration.
Everyone could adjust the speed of the massager's vibration.
1.The power is supplied by the USB Port. 5V Input.
2.The product has the four colors available:Yellow,Red,Blue,and Green.

Posted by Stupid at 2:25 PM No comments: 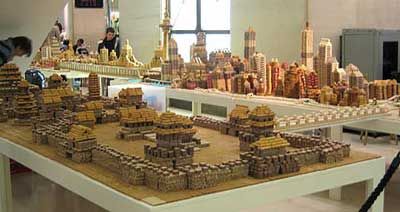 Biscuit City being built at Selfridges in London. On the Biscuit City according to the builders there was no real plan. Chinese Artist Song Dong designed a few of the big buildings, but most of it was down to the builders to make up as they went along. Biscuits and bright jelly bean type sweets have been used in the construction, but wafers seem to be the main building blocks of choice. Anything else was mainly just for decoration. McVities, one of the sponsers, had a fair range out on show including Gingernuts, Shortcakes, Digestives, Fruit shortcakes, Pink Wafers, Custard Creams and the often hard to find Crawfords Fig Roll. Many of the wafers were made by Loacker, an Italian company who seem to specialise in them. These seemed to have been chosen for their length as much as anything, about twice that of a pink wafer, finding their way into various bridges and arches. The Pink wafers had been used sparingly, probably they're too garish even for use as building blocks.
Ryvita crispbreads got to join in the fun, though mostly to be used as a utiliterian floor, rather than lofty skyscrapers. I was a bit miffed that there weren't any Jaffa Cakes, but maybe that's because they're a cake, and this was a biscuit thing. And they're a bit rounded on top, so probably tricky to build with. Despite it being a Chinese design I didn't spot any Chinese biscuits. Perhaps they were worried they would scare people away. I had a quick chat with one of the builders. She assured me that despite working for days on the job she had not been put off biscuits, and when the job was over she would continue to eat them. Although not too many as that would make you sick. Well quite. I would also like to reassure anyone who is thinking of going that all the biscuit builders were wearing gloves, but not hard hats or flourescent jackets. 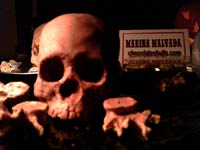 Marina Malvada has created her deadly delicious Chocolate Skulls for All Hallows Eve, All Saint's Day, Day of the Dead, and any other occasion for honouring the departed. These "life sized" and realistic confections, cast from an actual human skull, are worthy competition to any Jack-O-Lantern. Composed of the highest quality mixture of white and milk chocolates, Marina's Chocolate Skulls are a sensual way to celebrate the 'deep dark sleep that comforts all but the living'.

The inspiration to cast skulls in chocolate came about when Ms. Malvada made a silicon mould of a skull to cast in plaster. She discovered food grade silicon and immediately thought how wonderful it would be to have delicious, realistic chocolate skulls! Adding just a little milk chocolate to the Belgian white, she perfected the tone and flavour, appropriately naming the new blend, "Bone Chocolate".

That was the easy part of the project. The trials of casting in food grade silicon quickly became apparent. It is very fragile, and this may be the reason we do not see many such complex and fine detailed casts as these. Nevertheless, Ms. Malvada was able to get a couple of good casts in time for the Royal Sarcophagus Societie's "Carnival of Curiosities Her determination to successfully reproduce the look of a genuine human skull in a such a confecious medium certainly paid off, as you can see in the photos. As one enthusiastic connoisseur expressed it, "You've combined my two favourite fetishes: Skulls and Chocolate!"

He Must Feel So Proud

Posted by Stupid at 9:39 AM No comments:

Have you got what it takes to be a Big Fast Finger round town?
Or are you a bit of a limp clicker?
It's a mouse clicky thing.

Posted by Stupid at 1:59 AM No comments:

Look at the pictures that appear and guess the search term used.

"This whizzy non-Flash quiz is a bit on the addictive side. It raids Google's image search, shows you the images, and in that equally addictive Jeopardy! way makes you guess the question. Sometimes one-word answers, sometimes two words, it'll have you wasting away the morning. Nifty."
-- St. Petersburg Times