AN ALLEGEDLY drunk driver stunned pursuing police by jumping into the back seat with his three passengers, leaving his car to career out of control.
The 24-year-old man was charged with with resisting arrest and driving under the influence of alcohol after he abandoned the wheel on Saturday, ignoring the police car’s siren and signals to pull over.
Posted by Stupid at 11:21 PM No comments: 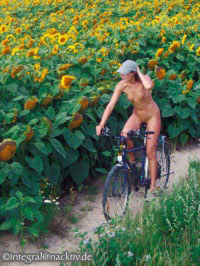 Get ready for the Second Annual World Naked Gardening Day (WNGD)! People across the globe are encouraged, on Saturday, September 9, 2006 to tend their portion of the world's garden clothed as nature intended.

Why garden naked? First of all, it's fun! Second only to swimming, gardening is at the top of the list of family-friendly activities people are most ready to consider doing nude. Moreover, our culture needs to move toward a healthy sense of both body acceptance and our relation to the natural environment. Gardening naked is not only a simple joy, it reminds us--even if only for those few sunkissed minutes--that we can be honest with who we are as humans and as part of this planet.

A Thai elephant who lost a foot after stepping on a landmine six years ago has had a temporary limb fitted.
Motala, 44, is set to wear the sawdust filled canvas shoe for up to eight months to help her leg get strong enough for a more permanent prosthesis.
She made headlines in 1999 by stepping on a landmine during work at a logging camp near the Thai-Burmese border.
Vets managed to carry out delicate repairs on Motala's left foot, but the leg was left shorter than her others.
She has been cared for by the Friends of the Asian Elephant's hospital in Lampang province, some 600km (370 miles) north of Bangkok, ever since.
The prosthesis, which looks like a boxing bag and is filled with wood shavings, has been fitted daily for more than two weeks.
Link

Imagine: your dog, cat, or other pet in full military regalia.

Pets In Uniform
Posted by Stupid at 11:14 PM No comments:

Tired of receiving mounds of unsolicited letters and offers in the mail? Want to fight back? Want to get rid of that old tire in your garage that the garbage man won't take? Then read on......
If you're curious why this document was developed, it was due to the hundreds of unsolicited letters sent to me by a very annoying company called MCI. They love to mail people unsolicited letters 1-2 times per week despite requesting to be taken off their mailing lists. Well, here's a completely LEGAL way to fight back against idiots like MCI. You can mail their junk back to them for FREE using their own postage-paid envelopes. The only catch is that it will be attached to 50 lbs of additional junk you've gathered from around your house (rocks, bricks, old shingles, etc.). This works, so please read on.... 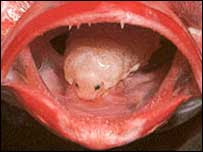 A gross creature which gobbles up a fish's tongue and then replaces it with its own body has been found in Britain for the first time.
The bug - which has the scientific name cymothoa exigua - was discovered inside the mouth of a red snapper bought from a London fishmonger.The 3.5cm creature had grabbed onto the fish's tongue and slowly ate away at it until only a stub was left. It then latched onto the stub and became the fish's "replacement tongue".
Posted by Stupid at 11:13 PM No comments:

The mayor of an Austrian town called 'F**king' has appealed to British tourists to stop stealing the road signs.

Siegfried Hauppl said the small town always attracted a lot of attention from tourists driving up from nearby Salzburg to pose for pictures in front of the signs.

But he said that, while the money they spent in the area was welcome, locals were fed up with having to replace the signs because people had been stealing them as souvenirs.

He said: "We had a vote last year on whether to rename the town, but decided to keep it as it is.

"After all, F**king has existed for 800 years, probably when a Mr F**k or the F**k family moved into the area. The 'ing' was added as a word for settlement."

Apparently the villagers didn't find out about the English meaning of the word until British and American soldiers stationed in the area in 1945 started arriving in large numbers.

Hauppl said: "We all know what it means now, but for us F**king is F**king - we don't give it a second thought."

He said: "Most of them can speak English, and when someone asks them where they come from they are a little ashamed to say it."

Residents of two other Austrian communities, Windpassing and W**k on the Lake, suffered a similar reluctance, he added.

Bryan Berg, the acknowledged inventor of cardstacking on the grand scale, embarked on a month-long project with Walt Disney World in Orlando, FL to create a new Guinness World Record category with the World's Largest House of Cards. A self-taught artist, Berg uses no tape, glue, or other tricks in his work. With 3,000 decks of freestanding playing cards, some scaffolding, and a view of the real building, he worked for a month on the Disney grounds to build the company a 450 pound card version of Cinderella's Castle. The structure was 14 feet tall and 14 feet square, detailing all the turrets and tunnels of the actual castle. Even the artist was surprised at how strong his huge construction turned out to be when a renegade squirrel ran in the room, destroying most of the supporting grand entry while the rest of the castle's cards stood unaffected. Now, Berg- 13 year running record winner for Tallest House of Freestanding Playing Cards at over 25 feet high- is a double title holder. Upcoming 2006 appearances include dates in San Francisco, New York City, Las Vegas, Boston, and Dallas. Check back for news on events in your area.

Posted by Stupid at 6:21 PM No comments: