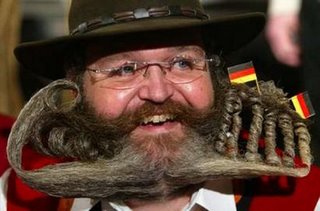 The World Beard and Moustache Championships is a biennial event supported by beard and moustache clubs in at least nine countries.
Future championships are set for 2007 in London. The responsibility for organizing the championships will be with London's famous Handlebar Club.

Subdermal implants: body-mods that give you cool lumps 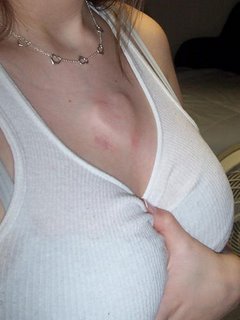 Quinn Norton profiles the body-modification practice of subdermal implants, through which substances like molded silicone are slid beneath the skin to produce raised, shaped lumps. BMEZine's Shannon Larratt -- whose site and work often appear here -- is featured in the story, which covers the connection with this work and implanted RFIDs, and why the plastic surgery establishment won't touch it.
The process creates a raised area on the skin in a shape of the artist's choosing. The effect is dramatic: Implants can be most any form you can think of, from Star Trek ridges and small horns, to little stars and hearts sprayed across the chest. Many people with body modifications have combined their implants with tattoos to create often beautiful or terrible effects.
Subdermal implants

Build your own Gas Mask from computer parts 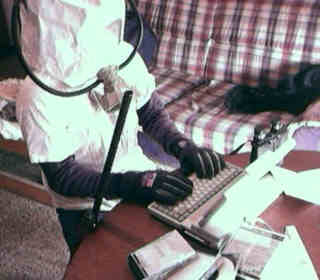 Can't you buy expensive gas masks? Do you need one? are you a computer geek?
If you answered yes to this three questions, then this is your page! We're gone to build our gak mask from computer parts at cost almost 0.
The main idea is to protect you agains hazardous elements that could invade the air in your home or country. If you fear anthrax, variola, ebola, alien viruses from outer space you must build it to feel safe. If nuclear war doesn't come you can always use it on the disco when it's full of smoke.
Evil could be everywere and you must be prepared! Don't waste your money on beautilful masks than won't protect you. SorgoMask (TM) will protect you even underwater. Don't wait and don't forget to build one for everyone in your family. It's also the perfect gift for christmas time.
[technorati tags: computer parts, gasmask, gas, mask, stupid]
Posted by Stupid at 9:58 PM No comments:

A new trojan that holds computer files "hostage" and then then demands a $US300 ($410) ransom for their safe return has been identified by a virus tracking company.

The trojan has been labelled "ransomware" because it uses malicious code to hijack user files and to encrypt them so they cannot be accessed. It then asks for payment in return for the decryption key.

It was discovered by security company LURHQ, which has identified the threat as Cryzip. It is the first ransomware to be identified since May last year when Websense Security Labs found a similar trojan.

LURHQ said that Cryzip encryption was based on a more robust commercial zip library than its predecessor, which applied a custom encryption scheme to files.

"Do not try to search for a program what encrypted your information - it is simply do not exists in your hard disk anymore. If you really care about documents and information in encrypted files you can pay using electonic currency $300," the text message says.

Denial of service attacks are currently the most popular method of extorting money online and internet companies, such as online casinos, are often targeted in these attacks. They are launched by overwhelming their networks using bot-infected computers and money is then demanded to stop the attacks.

The Cryzip trojan seeks to extort money on a much smaller scale and is not believed to be very widespread, said LURHQ.

"As such, most users will probably not have to worry about this threat ... keep in mind, however, that the two incidents in the last 10 months indicate the possible start of a trend of this type of malware, and future incidents may affect a wider swath of users," the company said.

Chris Horsley, security analyst at computer emergency response team Auscert, said no reports of the trojan had yet been received in Australia.

"I suppose this type of attack does have a particular threat to it. To receive an email like this is a very scary proposition, but there are other areas where money can be made more effectively by criminals, namely through keylogging and phishing," he said.

He added that the Cryzip trojan lacked the stealth of other attacks with the extortionist required to make contact with the victim to receive payment.

In a recent security report, Symantec said an increasing trend in computer attacks was the silent theft of data for profit without doing noticeable damage that would alert a user to its presence.

Posted by Stupid at 4:05 PM No comments:

HARARE, Zimbabwe -- A bogus traditional healer who persuaded a businesswoman to hire "mermaids" and accommodate them in a Harare hotel to help find a stolen car was convicted of theft by false pretenses, court officials said Tuesday.
Harare magistrate Sandra Nhau found Edina Chizema guilty of swindling a businesswoman of her savings with promises that mermaids would help recover the luxury car in 2004 and solve the businesswoman's unspecified "personal problems."
In Zimbabwe, where tribal superstition is deeply entrenched, prosecutors said Chizema persuaded Margaret Mapfumo to pay 200 million Zimbabwe dollars (about $30,000) to hire mermaids, feed and accommodate them in a Harare hotel, buy power generators for a floodlit lakeside ceremony and invoke ancestral spirits to find the missing car.
Some of the money was to be used to buy a bull whose genitals -- described in court as the animal's "strong part" -- would point out the car thief, prosecutors said.
At a hearing Monday, the magistrate said Chizema, who had pleaded not guilty and claimed to be a spirit medium, was not a credible witness and the "idiosyncrasies" of her plea were not recognized in law.
Chizema will be sentenced to imprisonment or a fine at a sentencing hearing later, the court officials said.
In Zimbabwe, prominent figures and even leading politicians have often been the victims of such scams.
[technorati tags: bogus, healer, mermaids, scam]
Posted by Stupid at 1:30 PM No comments: 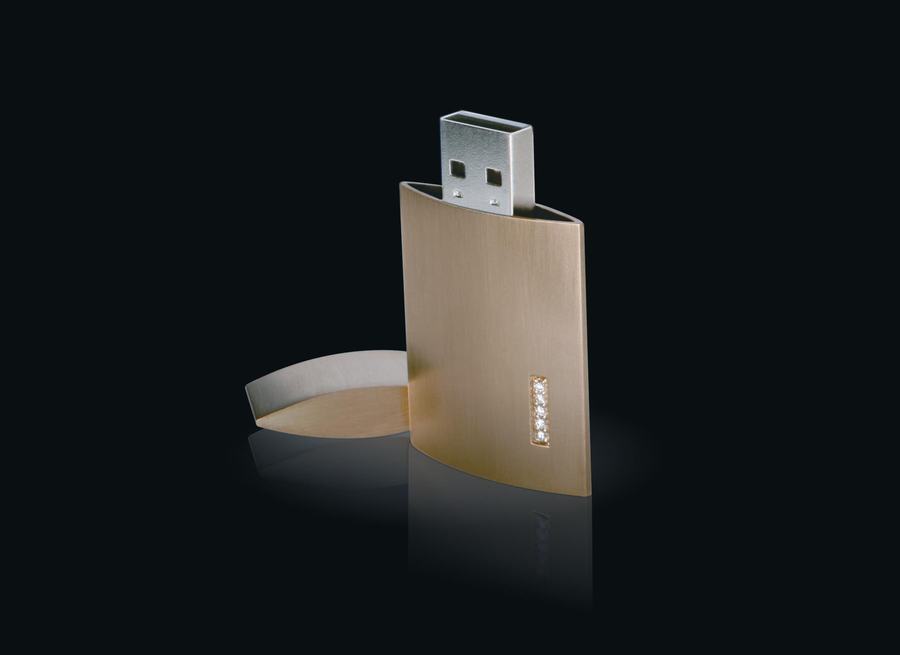 What do you buy for the geek that has everything? Well, certainly not a $3,500 gold-plated, diamond-encrusted USB memory stick.

White Lake said Thursday that it will introduce a exclusive USB stick at the CeBIT show on March 9 in Hannover, Germany. But the $3,500 USB key isn't about function in fact, the capacity of the USB stick wasn't even mentioned. However the capacities will include 128MB, 256MB, 512MB and 1024MB.

According to White Lake the USB stick is now also available as a luxury item rather than as a plastic commodity. It's made of 14-carat gold and sports five polished diamonds.

"This product will open new markets for us," said White Lake owner Rob van Berkom, in a statement. "We have sold huge amounts of personalized USB stick with logos over the past year. Our customers used them as a give-away. Some of them asked us for a more exclusive product line. This stick meets their demand, so we expect to sell quite a few of them."

The USB stick was hand made and was designed by the Dutch goldsmith Erwin de Vroome, and can be customized still further.

Posted by Stupid at 2:03 AM No comments:

We're On Our Holidays

And we're going to enjoy ourselves.

Posted by Stupid at 1:10 AM No comments:

There aren't too many products that feel the need to reassure you that they are, in fact, "food." Already not a good sign.

The list of ingredients is long and horrifying, coming right out of the gate with "MECHANICALLY SEPARATED CHICKEN." Oddly enough, I'm about to be separated from my lunch, and I haven't even opened the can yet.

Other ingredients include BEEF TRIPE, BEEF HEARTS, AND "PARTIALLY DE-FATTED COOKED PORK FATTY TISSUE" How does one de-fat fat? Bizarre. God knows what else is in here.

Okay, I'm going to go try it now. If i'm not back in ten minutes, call Poison Control...