Alex Sklyar is a very patient man. He’s so patient that he could spend close to 10 000 hours during a period of 15 years to complete this detailed model of the Mil 24 chopper. He started building in 1986 and 100 000 parts later the model was completed. I don’t think he’ll let his grand children play with the model, hehe. 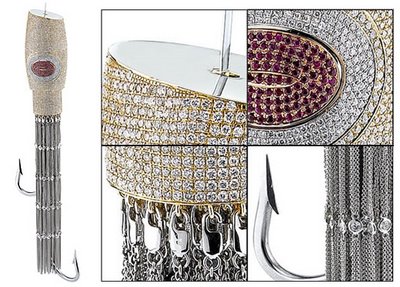 The Million Dollar Fishing Lure it's made of three pounds of gold and platinum, and encrusted with 100 carats of diamonds and rubies—4753 stones in all, and is over 12 inches in length. They also have less expensive lures that cost from $150 to $1,200. . It's over a foot long, and is designed for big-game fishermen who are looking to hook the next Moby Dick.Wana buy one ? Here you have the oficial website.
Posted by Stupid at 10:28 PM No comments: 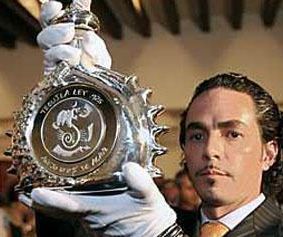 A private collector has hit the most expensive charts with the purchase of a bottle of ‘ultra-premium’ Tequila for an astounding price of $225,000!! The world’s most expensive tequila comes in a gold and platinum bottle of Tequila Ley. The bottle is filled with Pasion Azteca tequila, made from pure sap of the blue agave plant that has been fermented, distilled, and aged for six years. [ Via ]

Diaka Vodka, is the world’s most expensive vodka. The vodka comes in a bottle made with crystals, but this is not what makes it most expensive. It’s actually the filtration process of the vodka that makes it exclusive. The Diaka Vodka is made in Poland where they use nearly one hundred diamonds of up to one carat in size, to filter the spirit resulting in vodka with unsurpassed clarity and smoothness. The diamond-vodka is only available by TransBorder Spirits in USA.[ Via ] 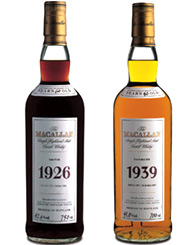 The most expensive list is topped by the 60 year old whiskey from the Macallan Fine and Rare Collection, 1926. Though, the $38,000 scotch whiskey is now sold out, but, Forbes reports that, you can still have it for $3,300 per dram at the Old Homestead Steakhouse in the Borgata Hotel Casino & Spa in Atlantic City, N.J. Second on the list is another whiskey from the Macallan collection, 1939 that sells for $$10,125 which is closely followed by $10,000 blended scotch from Chivas Regal Royal Salute that was released in 2003 to commemorate the 50th anniversary of Queen Elizabeth II’s coronation. 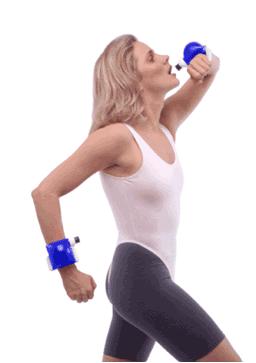 People are more and more inovative, I found a lot of original and creative ideas, some of them are really useful.Now something that I've found really intresting is the wrist water bottle.A company called HydroSport is marketing a new water bottle that fits on your wrist.

Described as a "Wrist Water Bottle", each unit holds 5.5oz of water or sports drink, for a total of 11oz when you have one on each wrist. When fully loaded, the unique bottle weighs one-half pound, providing you with some additional exercise.

At $9.99 each, they're available in a variety of colors, and even come in kids sizes.

I like this idea, and is really useful, because you go outside and you don't need a water bottle with you with these accesories. 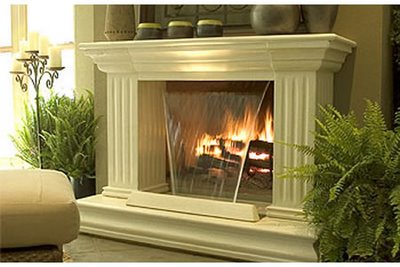 How about adding a waterfall to your existing fireplace? So in the summer you can have the relaxing sound of flowing water whilst in the winter the warming sound of crackling fire (or a combination of the two). Hearthfalls, has ingeniously developed a way to bring the two worlds together in the home. 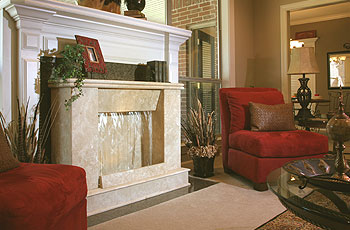 The whole thing is designed so that no water actually splashes onto the roaring fire accidentally putting it out and kicking up clouds of smoke. There's even a remote control to easily change the color and water flow from across the room, and the mantel is available in variety of marble textures and colors to suit your room ambiance. So in the summer you can have the relaxing sound of flowing water whilst in the winter the warming sound of crackling fire (or a combination of the two).
Cost: $2,495 (wood) to $40,000 (lapis) - More info on oficial website. 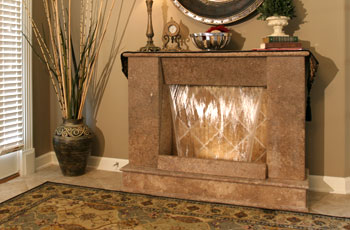 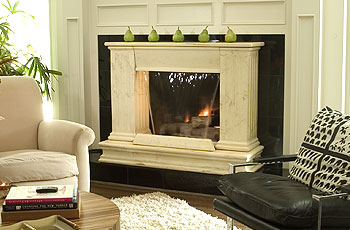 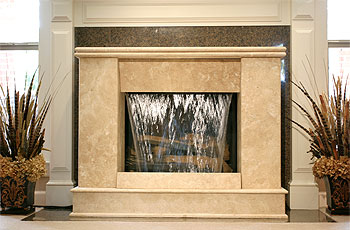 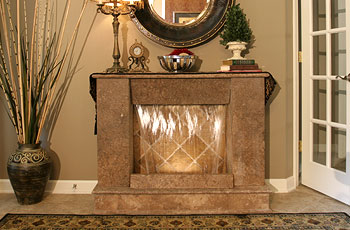 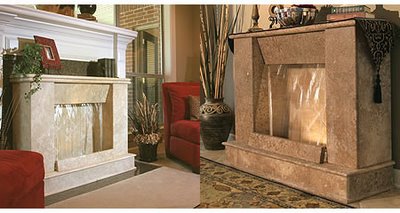 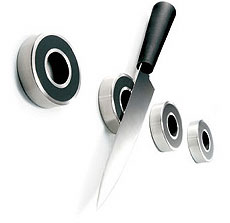 There’s a new way to access your knives now instead of the usual countertop knife block.Stainless steel knife magnets boast a non-slip rubber front and powerful magnet, which secures the knife in place by attracting its blade to its magnetic area. To assemble, simply screw the fittings onto the wall with the included screws and mount the knife magnets on the fittings. Each magnet can hold one or two knives, depending on their size and weight. 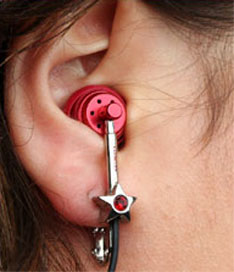 Since the current generation carry their music wherever they go, it is not uncommon to see a pair of wired earphones hanging from our aural cavities no matter where we are. EarMecca from Korea has decided to marry fashion with technology by introducing these specially designed EP Series Earphones that double up as earrings while you enjoy your music. There are over 10 different gold and silver-crafted designs to choose from. There is no word on pricing and availability details, but you can pick one up today if you're in Korea.

This ad was done by BDDP Fils, France.We all know what is advertising, and a definition of advertising sound like this :

Advertising is the commercial promotion of goods, services, companies and ideas, usually performed by an identified sponsor, and performed through a variety of media. Marketers see advertising as part of an overall promotional strategy. Other components of the promotional mix include publicity, public relations, personal selling, and sales promotion.

We know that is just a definition, and the true purpose of any advertiser is to sell something no mather how he does that.In these days advertising is very powerful because those who create ads use powerful psychology tactics, that make us buy a product. 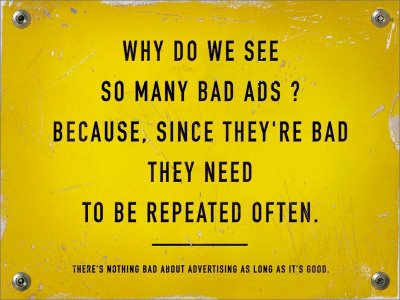 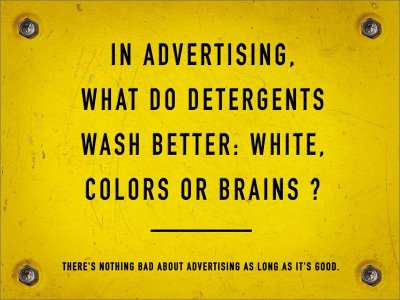 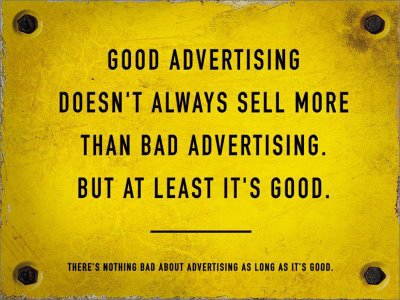 These Wet Floor sign boards done by 1pointsize agency were placed near Eatalica Burger Signboards with the message 'Ogling at the burger may involuntarily cause drooling which may in turn lead to a wet floor. Issued in your safety by the management of Eatalica Restaurant. 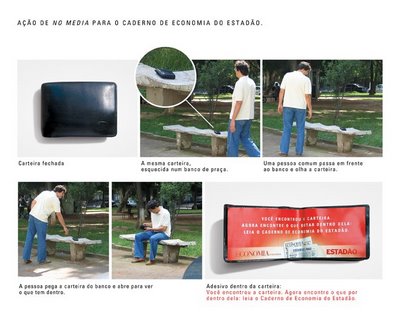 "Forgotten" wallets were left aroun the city of São Paulo, Brazil. Inside was a sticker saying " You found the wallet, Now find what to put inside of it: Read Caderno de Economia do Estadão"