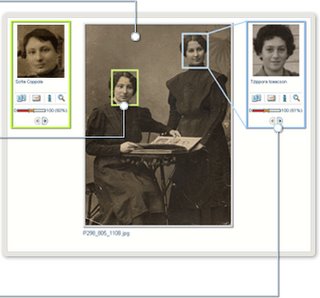 One of the world's first services to apply advanced face recognition technology to personal photos and family history.

You can upload your family's elusive old photos that no-one in your family knows who is in them and let MyHeritage.com try to recognize these people. If some other member on MyHeritage.com contributed another photo with one of your mystery people, MyHeritage.com will make the facial connection, show you the similar faces and allow you to get in touch with people who submitted photos relevant to you.

Posted by Stupid at 7:09 PM No comments: 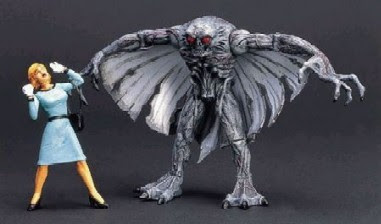 Bigfoot, Loch Ness Monster, Mothman, Chupacabra, those kind of creatures. There have been some pretty cool cryptozoology action figures over the years. The Mezco Cryptozoology series were anticipated for quite some time before being eventually released. Supposedly, they were delayed due to negotiations over the licensing of a videogame that was to feature their likeness.

Posted by Stupid at 3:17 PM No comments:

Six hamsters, some sensors, a midi box, and some intelligent software come together to make music.

This project was initially fueled by the desire to explore the MIDI protocol. It was decided that this would be accomplished by building a MIDI device. I also aimed to make something novel that had never been done before. But to balance out the unusual nature of its design, I wanted to also to create something that was very musical.After much consideration of different technical design aspects and contemplating various musical ideas, I was able to arrive at a project that would fulfill all of my musical and engineering goals.An intelligent MIDI sequencer was designed with hamster control. The MIDI sequencer intelligently produced melodies by manipulating the musical elements of rhythm and note-choice. Guided by inputs based on hamster movements, Markov chains were used to perform such beat and note computations. In culmination, 3 simultaneous voices were produced spanning 3 octaves and 3 rhythmic tiers. Each voice was controlled by two hamsters: one that was responsible for adjusting the rhythmic qualities of the melody and another that modified the note sequence. With all of these elements in combination, an output was produced with very musical qualities.All of this was implemented using an Atmel Mega32 microcontroller, distance sensors, a HamsterMIDI Controller, and 6 hamsters. Embedded C programming implemented the algorithms and computations within the sequencer.Overall, this project was successful. The control between the hamsters and the musical intelligence turned out very well. The music sounds as good as I imagined, and I am very satisfied with the outcome of my design experience.

Posted by Stupid at 1:34 PM No comments:

Lorelei Hunt has been helping people communicate with their animals since 1996. Using telepathy, she conveys what an animal is thinking and feeling as well as answers to any questions that their humans ask them. Lorelei's experiences range from domestic dogs and cats to wild animals in captivity and wildlife refuges. Through lectures, workshops and practice groups, she is committed to teaching people how to use their natural telepathic abilities to speak with the animals.

Lorelei has completed advanced studies under Anita Curtis and Penelope Smith, who is a pioneer in the field of Interspecies Telepathic Communication. As an ordained minister, Lorelei can offer spiritual counseling for you and your pet.

Lorelei lives in New Castle, Delaware with canine friends Kelsey and Libby, and
with felines General, Dazzle, and Simon.

She communicates telepathically with animals.

Posted by Stupid at 2:44 AM No comments:

Hatebeak - A death metal band with a parrot for a singer.

Face-crushing guitars, head-pounding drums, bass so low you'll vacate your bowels, and vocals so scorching, so extreme they simply can't be human! They're not. This death metal outfit with a parrot for a singer makes trashes the pathetic birdfeeder you call the metal underground!
That's correct, a parrot for a singer, savaging you with feathers of razored steel! This is not Jimmy Buffet's parrot - be warned! Try as one might, they will not escape the claw; nothing can dodge the talons of hate!! These three songs are an ABSOLUTELY NECESSARY beak in the ass of all things sacred in the underground. The holiest shrines of metal and hardcore seriousness are duly trashed, burned, laid to waste, smeared in Avian excrement. The pecking order has been established! For the last time, it really is a parrot, not the loser from Six Feet Under.
Groundbreaking, nest-crushing, egg-shattering! You can run, but you can't fly.
Hatebeak

Posted by Stupid at 1:58 AM No comments:

From Madame Fared.
Have you tried to cast spells or make your own lucky bags with no success? This is because you do not have the force of concentration that is needed. It can only be developed over many years. Those who sell the spell kits do not tell you this.
The Instant Spells that I will perform for you are listed below. A small donation of $13.13 is required to activate the Spell. These Spells I will perform to bring back a lover or mate, to give you needed luck in gambling or games or or to bring a specified amount of money if you are in need.

Posted by Stupid at 1:58 AM No comments:

Don't have time to read it all?

We at Book-A-Minute understand that your time is valuable. You want to experience the wonder and excitement of the fine art of literature, but reading actual books requires a significant time investment. We've got the solution for you. Our ultra-condensed books are just the ticket.For when time is short.

Posted by Stupid at 1:49 AM No comments:

Is your pet psychic? Biologist Rupert Sheldrake says that living things have morphogenic fields- invisible vibrations that surround and give shape to life forms, and affect their behaviour. This telepathic interconnection extends across the barriers between species and may even increase the intelligence of animals as a result of contact with their human masters and companions. Pets have often been known to mimic human behaviour and can sometimes display remarkably intelligent actions. For example they frequently learn to cope with the door fasteners of new refrigerators so that they can help themselves to food, within minutes of the refrigerator's installation.
[technorati tags: psychic, pets, twilight, bone, telepathic]
Posted by Stupid at 1:17 AM No comments:

Revenge Advice - Revenge Lady gives advice on using the ancient art of revenge to bring humor and happiness back to your life. Come rediscover this traditional code of honor. It’s justice, plain and simple.

Posted by Stupid at 1:03 AM No comments:

The man's heart stopped beating after a heart attack, but the man did not die

Nikolai Mikhalnichuk, a resident of the Russian city of Saratov, is a unique man. He is the only person in Russia, who lives with a still heart.

The story started several years ago, when Nikolai's relationship with his wife, Lydia, started worsening. Lydia was coming home late, Nikolai was answering dead phone calls: he realized that she was having a love affair. One day Lydia said that she wanted to leave him.
Nikolai was crushed with the news – he had a heart attack at night. He felt sharp pain in the chest, and it took him great efforts to call an ambulance. When doctors looked at the cardiogram, they were surprised to see that the graphic waves on the paper did not look like usual ones – Nikolai's diagram was much smaller.
When doctors examined Nikolai's heart through blood vessels, they were shocked to find out that the man's heart was not beating, although the vessels continued pumping his blood. Nikolai's body was functioning on the base of absolutely unknown rules.
[technorati tags: russian, lives, life, heart, , blood]
Posted by Stupid at 12:31 AM No comments: