Send in a sample of your skin.

We invite everybody to join this project: the purpose is to create a massive database including as many different skin characteristics as possible.

How?
Send us a sample of your skin as an image JPEG file (please follow the instructions below): we're preparing "HumanTone", a complete reference book of human skin tones and hues as an ironic support to the ScanYourSkin website.

Please join this part of the project by adding your skin. (no deadline)

The star-nosed mole, identifies and wolfs down its food in an average of just 227 milliseconds - less than quarter of a second.

Scientists have revealed the identity of the fastest eating mammal - the distinctly peculiar star-nosed mole.

This mole finds, identifies and wolfs down its food in an average of just 227 milliseconds - less than quarter of a second. By comparison, it takes people 650 milliseconds to brake after seeing a traffic light turn red.

"I don't know of any other mammal that comes close to this," says Kenneth Catania, a biologist at Vanderbilt University, Tennessee, US, and lead author of the new study.

The key to the mole's speed feasting is its odd snout, which looks like an anemone with 22 pink tentacles. But the tentacles are not used for smell - instead the mole uses them to feel around in the darkness for potential prey.

Using a high-speed video camera, Catania and his colleague Fiona Remple found that when a tentacle touched something, the mole made very quick decisions about whether that object was food or not, usually in about 8 milliseconds.

Posted by Stupid at 8:41 PM No comments:

The Safest Bed In The World? 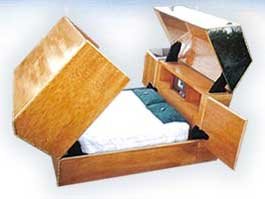 Quantum Sleepers can be fitted to provide protection from destructive forces of nature such as tornados, hurricanes, earthquakes and floods.

Posted by Stupid at 8:25 PM No comments:

What On Earth Is A Trebuchet? 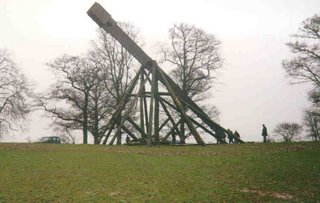 It's a big catapult (well sling shot to be technically correct) and you can throw really heavy things a long way with it. All sorts of things. Built by Hew Kennedy, the swing arm has a counterbalance weight of three tons on one end and it takes three tractors to ready it for firing. All in all, its an impressive set of kit.

It's not like this is rocket science or something. It's very simple. This site is all about CrushedCans. Cans are cool, they are readily available, they are easy to crush and they are part of our everyday lives. So here is a place you can purchase a blank, sealed aluminum can that has been artistically crushed. Obviously you've got many questions, so please see our FAQ.
With every purchase of a crushed can, you will receive the following:
(1) Crushed Can

Posted by Stupid at 4:04 AM No comments:

Swimming in syrup is as easy as water

Swimming in syrup is as easy as water
Michael Hopkin

You can swim just as fast in a pool of gloop.
It's a question that has taxed generations of the finest minds in physics: do humans swim slower in syrup than in water? And since you ask, the answer's no. Scientists have filled a swimming pool with a syrupy mixture and proved it."What appealed was the bizarreness of the idea," says Edward Cussler of the University of Minnesota, Minneapolis, who led the experiment. It's a question that also fascinated his student Brian Gettelfinger, a competitive swimmer who narrowly missed out on a place at this summer's Olympic Games in Athens.Cussler and Gettelfinger took more than 300 kilograms of guar gum, an edible thickening agent found in salad dressings, ice cream and shampoo, and dumped it into a 25-metre swimming pool, creating a gloopy liquid twice as thick as water. "It looked like snot," says Cussler.

" The fluid looked like snot. I don't know how to describe it any more poetically."
Edward CusslerUniversity of Minnesota

The pair then asked 16 volunteers, a mix of both competitive and recreational swimmers, to swim in a regular pool and in the guar syrup. Whatever strokes they used, the swimmers' times differed by no more than 4%, with neither water nor syrup producing consistently faster times, the researchers report in the American Institute of Chemical Engineers Journal1.

Planning permission
The most troublesome part of the experiment was getting permission to do it in the first place. Cussler and Gettelfinger had to obtain 22 separate kinds of approval, including persuading the local authorities that it was okay to put their syrup down the drain afterwards.But it was worth the hassle, Cussler says, not least because his quest for an answer made him something of a celebrity on campus. "The whole university was arguing about it," he recalls. "It was absolutely hilarious."But while it might sound like a trivial question, the principle is actually fundamental. Isaac Newton and his contemporary Christiaan Huygens argued the toss over it back in the 17th century while Newton was writing his Principia Mathematica, which sets out many of the laws of physics. Newton thought that an object's speed through a fluid would depend on its viscosity, whereas Huygens thought it would not. In the end, Newton included both versions in his text.Hamstrung by their lack of access to guar gum or competitive swimmers, Newton's and Huygens' work was mainly theoretical. Cussler's demonstration shows that Huygens was right, at least for human-sized projectiles.

" The best swimmer should have the body of a snake and the arms of a gorilla. "
Edward CusslerUniversity of Minnesota

The reason, explains Cussler, is that while you experience more "viscous drag" (basically friction from your movement through the fluid) as the water gets thicker, you generate more forwards force from every stroke. The two effects cancel each other out.That's not always the case. Below a certain threshold of speed and size, viscous drag becomes the dominant force, making gloopy fluids are more difficult to swim through. Had Cussler done his experiment on swimming bacteria instead of humans, he would have recorded much slower times in syrup than in water.But for humans, speed depends not on what you swim in, but on what shape you are. Once the effects on thrust and friction have been cancelled out, the predominant force that remains is 'form drag'. This is due to the frontal area presented by a body - try running with a large newspaper held in front of you and see how much more difficult it is.So the perfect swimmer, whether in water or syrup, has powerful muscles but a narrow frontal profile. "The best swimmer should have the body of a snake and the arms of a gorilla," recommends Cussler.The journal that published the study is the American Institute of Chemical Engineers Journal, not the American Institute of Chemistry and Engineering Journal as initially reported.

Posted by Stupid at 2:49 AM No comments:

Designed by Isabelle Leijn
Made in the Netherlands 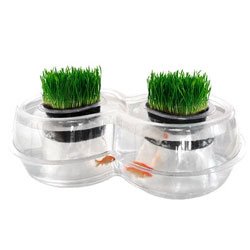 The Racetrack Fish Bowl is the perfect solution if your fish suffers from claustrophobia, or if you're simply looking for a tabletop conversation piece for your home or office. The Racetrack Fish Bowl is designed to give small fish, which are said to have a memory of 7 seconds, the sensation of long distance swimming. Instead of swimming side to side in a regular bowl, small fish can crisscross for miles through this unusual infinity-shaped bowl. Except perhaps for an occasional lapse of deja vu, every lap will seem like a new experience for your finned-friends.

This unique fish bowl has two integrated vases, which can be used as planters or storage for miscellaneous items. If you are using your Racetrack Fish Bowl in your home, consider using the vases to grow wheat grass or filling them with fresh flowers. For an office setting, they would make an interesting place to store pens, pencils, paper clips, or maybe even candy. Or, if you are a pragmatist, the vases make a convenient place to store fish food and fish accessories.

Stop your goldfish getting bored.

Posted by Stupid at 2:09 AM No comments:

Are you fed up with bringing bananas to work or school only to find them bruised and squashed? Our unique, patented device allows for the safe transport and storage of individual bananas letting you enjoy perfect bananas anytime, anywhere.

The Banana Guard was specially designed to fit the vast majority of bananas. Its other features include multiple small perforations to facilitate ventilation thereby preventing premature ripening and a sturdy locking mechanism to keep the Banana Guard closed. The Banana Guard is of course dishwasher safe for easy cleaning.

Posted by Stupid at 1:05 AM No comments:

PetRefresh is the only water available today that is specifically designed for the daily hydration needs of pets. Not a treat, but a core nutrient for better health.
Using a special filtration process, PetRefresh retains necessary nutrients that pets need. These nutrients are removed from any water product designed for humans, including regular bottled water and tap water that's run through a purifier.

What Could Be In The Water:
All public water systems contain some level of one or more unhealthful chemicals. Regulations only require periodic testing of about 86 toxic chemicals. There are now more than 75,000 chemicals used in our society with more than 1,000 new ones being developed each year.
So far, more than 2,100 toxic chemicals have been detected in America's water systems. And there are more than 75,000 patented chemical compounds in use today.
[technorati tags: PetRefresh, water, nutrients, pets, hydration, chemicals]
Posted by Stupid at 12:33 AM No comments: