Mini Pet Cactus - Be nice to it 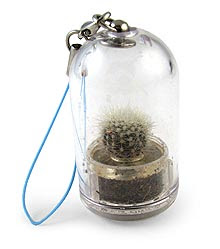 A long time ago I was blogging about the Pet Trees - which are now sold out and had to be imported. Pet Plant is back! Yeah!

Virtual pets are fun, but sometimes they can be a virtual pain in the virtual backside. You have to virtually feed them and virtually play with them. And yes, they virtually love you, but it's just not the same as real love. But one has to admit, most virtual pets are easy to carry around, whereas most real pets either won't fit in your pocket (like a dog) or wouldn't survive in your pocket (like a trout). We have the solution: the Mini Pet Cactus.

The Mini Pet Cactus will love you unconditionally. All you have to do it is water it once a month for about a minute (instructions on packaging). Each cactus comes with a strap to attach to your jacket, cell phone, etc., so you can take it with you everywhere. Nothing says fun like talking to your cactus in a public place - until security asks you to leave, that is. Want to display your new pet at home or in the office? Try the Mini Pet Cactus Stand (sold separately). It has an adhesive back to attach to a wall, your monitor, your forehead, etc. The Mini Pet Cactus is waiting to be adopted…by you! 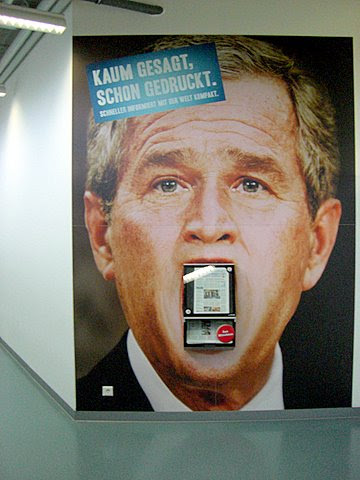 Barely said, already printed! That's what it's translates to. Pick up your copy!

I am loving it!

It kind of scares me, is it pulling out a tape worm out of it's mouth?

Forget those boring white containers, let Otto take over as your official dental floss holder. Just put the floss in Otto's back, feed the floss through his mouth and set him on your bathroom counter. Seeing him sitting on the counter holding your dental floss is sure to remind you to floss every night. Also a great way to encourage kids to floss.

World Cup Fever for your backyard

It's out of stock right now ..... but I thought that's pretty cool. Did I mention I usually don't care about soccer, but I must admit .. I am in Fifa World Cup Fever!!! But I have too many teams to support:

Germany - Well that's my other half from

South Korea - Because we got tons of friends from there!

Ok back to that inflatable Soccer field for 2 persons

You know those ads where the likes of Ronaldinho and Henry get to show off their fancy footwork whilst battling it out within the confines of a small playing area? Well now you can do the same thing with your mates via the brilliant Subbuteo Inflatable Soccer Pitch.

A distant relative of the bouncy castle in football pitch form, this ingenious blow-up enclosure is ideal for four-man kickabouts in the back garden. Simply plug in its über-powerful pump and the entire shebang - goalposts, pillars and all - inflates in about 30 seconds. Even Sir Alex on full hairdryer mode couldn't manage that! Indeed it's so simple to erect we can't understand why the slowcoaches at Wembley haven't gone down the inflatable route.

Once word gets out you've got a Subbuteo Inflatable Soccer Pitch everyone will want to pop round for a close quarters kickabout. Measuring 20ft x 12ft there's enough room inside this squishy enclosure for 4 adults (c'mon, you didn't think it was for kids, did you?). We suppose you could squeeze in a few extra friends, but seeing as you'll need a bit of space to pull off those fancy nutmegs we suggest you refrain from full-on pitch invasions.

With a Subbuteo Inflatable Soccer Pitch you can live out your footballing fantasies without suffering the intolerable stress brought about by a seven figure salary and the constant attention of Z-list starlets. You can even give yourself a suitably rubbery pseudonym: Vinyl Messi and Ruud Van Bouncytoy are currently practising penalties in the newly-christened Bernaboing we've inflated in the back garden here at Firebox FC!

Showing off your footballing prowess is easy with this attention grabbing arena; members of the opposite sex will flock to your mini tournaments in order to check out your ball control. And thanks to sturdy netting between all the pillars and posts they won't get a faceful of football every time you give it some welly.

With the beautiful game currently enjoying unparalleled levels of popularity we reckon this fantastic footballing accessory is going to move faster than a Steven Gerrard volley. So don't be indecisive like Ron "either side could win it or it could be a draw" Atkinson. Order your Subbuteo Inflatable Soccer Pitch now. Back of the net!

Leave your Hummer II at home 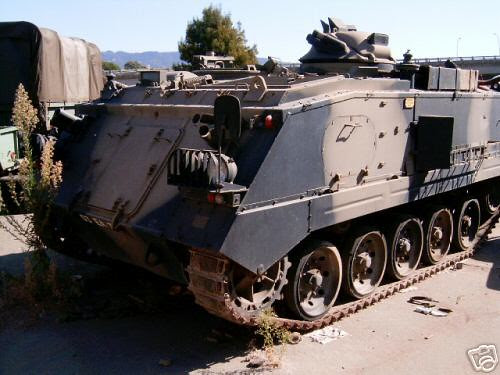 Just imagine the looks of the other parents when you pick up your kid from school with this vehicle. Your Hummer is going to look like a toy compared to this thing.

Siamese pig in a jar 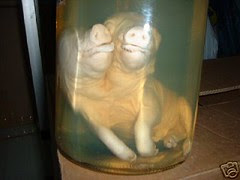 This is the cutest thing I have seen in a long time. They bring double luck! Hurry up: Auction runs out in 16 hours. Current bid is $3.000. 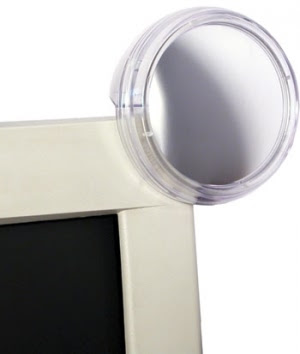 This actually is very helpful, I think! No more colleague can sneaking up and surprise you while you check the latest entries of Random Good Stuff.

Ever wished you had eyes in the back of your head?
With the computer rear view mirror you'll be able to make sure your boss isn't about to sneak up and catch you looking at things you shouldn't be looking at. You never know, they could even save your career! It's just a concept - but you never know. Once you hit the surface in the Urinal - the game starts and the fun can begin. The creator is Marcel Neundoerfer and calls the concept "On Target" 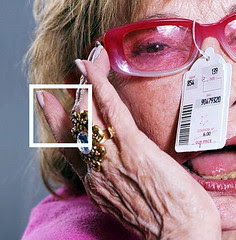 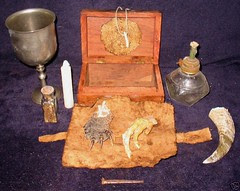 The seller has a very sweet way to deak with possible buyers:

This auction is perfect for you, just in case you need to put a hex an someone ... here we go:

~Wooden Box~
Inlaid Brass Stars & Moons On The Outside Lid Aged Picture On Inside Of The Lid Approx. 6in. X 4in.

All Items Are Real!

LINK to the occult acution. 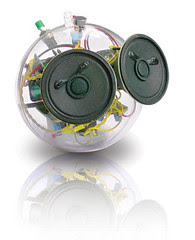 Should I really feel honored if I would have the privilege to buy one of those? No doubts that they are cool though!

Soundbombs are New-Media-Accessories. Each one a lowtech object for interactive transmission. An integrated soundmodul makes it possible to record any given sound and then activate it through a motiondetector. As a Non-Visual Graffiti, with its origin in streetart, Soundbombs give the possibility to tag a place in an accoustic form: a welcoming greeting at the entrance or a warning of a bad restaurant. Each owner can leave a personal message anywhere and at any time. Soundbombs can whistle, laugh, belch or recite a poem.

One can apply for the purchase of a Soundbomb – only those who deserve a Soundbomb, get a Soundbomb! if one is elected, he/she obtains an unique "accoustic" email addresse (e.g. thud@soundbombs.info).

Posted by Stupid at 2:22 AM No comments: