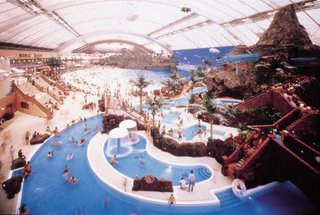 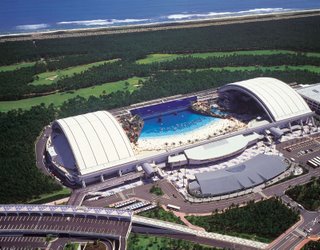 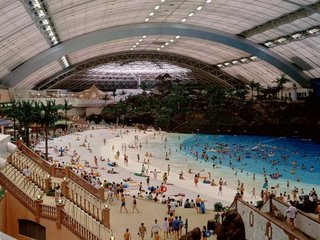 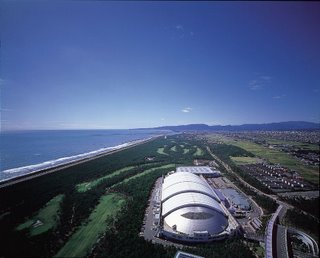 Sun, sand and surf were everyone's prescription for holiday paradise, but, in the south of Japan, they leave nothing to Mother Nature.

Imagine a beach where the sky is always blue, it's never too hot or cold, the water isn't filled with salt and pollution, and the surf is always perfect - welcome to Ocean Dome, the world's only indoor beach. Amazing photos.

Every hour, the volcano erupts and the hi-tech wave machines start up, starting a few minutes of sanitised surfing.

Entrance costs US$50, which seems especially expensive given that there is a free, natural beach only 300 metres away.

In The Name Of Education - Teacher drops his trousers in front of 300 students.

Before reading on, remember that truth is sometimes stranger than fiction. The highlight of Professor Burger's April, 1993 talk to more than 300 Williams College students and their parents occurred when he tied his feet together with a stout rope, leaped onto the table, dramatically removed his

belt, unzipped his zipper, and dropped his pants. The purple cows (Williams mascots) that were mooing about on his baggy boxer shorts completed an image not soon forgotten in the annals of mathematical talks. The more conservative members of the audience were contemplating a transfer of their sons and daughters to a less progressive school.

But then, at that moment of maximum bewilderment and absolute disbelief, Professor Burger did the seemingly impossible feat of rehabilitating his fast-sinking reputation. He turned his pants inside out without removing the rope attached to his feet and pulled his trousers back to their accustomed position (though inside out). Thus he simultaneously restored his modesty and his credibility by demonstrating the mathematical triumph of reversing his pants without removing the rope that was tying his feet together.

Please attempt to duplicate Professor Burger's amazing feat-in the privacy of your room, of course. You will need a rope or cord about 5 feet long. One end of the rope should be tied snugly around one ankle and the other end tied equally snugly about the other ankle. Now, without removing the rope, try to take your pants off, turn them inside out, and put them back on so that you, the rope, and your pants are all exactly as they were at the start, with the exception of your pants being inside out. While some may find this experiment intriguing, others may find it in poor taste. Everyone will agree, however, that surprising out comes can arise if we are allowed to bend and contort objects and space.

Posted by Stupid at 2:30 PM No comments:

For when speed dating is too slow. Mail Order Husbands

Posted by Stupid at 1:32 PM No comments:

An artist’s rendering of the day Palestinians
decide they want to live in peace.

Entertainers. Can any waft of logic pierce the overpowering scent of narcissicism in their deviated septums? Looking to succeed where Jason Alexander, Danny DeVito, Rhea Pearlman, Brad Pitt, Jennifer Aniston and Edward Norton (Death To Smoochy) failed, Roger Waters thinks his tortured vocals and now decades long musical impotence will tear down the wall that has helped save Israelis from Palestinian suicide bombers that rained the Intifada on every pizza parlor and Seder supper.

Succumbing to pleas from his Hamas co-conspirators after they threatened boycotting his “peace” concert from being held in Tel Aviv, Waters helped put it all in perspective in the manner that’s kept him so culturally relevant since embarking on his solo career:

“I am happy to play to anybody who believes in peace. I don’t discriminate between any of my fans, wherever they live. Being an Israeli does not disbar from being a human being.”

Glad we cleared that up. Israelis are humans. Recognizing their statehood can’t be far behind!

Recently, San Francisco’s Indymedia reprinted an “open letter” from the Electronic Intifada to Waters and helped put it in terms we’re more accustomed to hearing:

The Palestinian arts community received in disbelief the news of your upcoming performance in Tel Aviv in June, at a time when Israel continues unabated with its colonial and apartheid designs to further dispossess, oppress and ultimately ethnically cleanse Palestinians from their homeland. We strongly urge you to cancel your plans to perform in Israel until the time comes when it ends its illegal occupation of Palestinian territory and respects the relevant precepts of international law concerning Palestinian rights to freedom, self-determination and equality.
[…]
Ironically, when you were invited last year to perform in the Palestine International Festival 2005, the theme of that festival was “Another BREAK in the Wall!” The following lyrics for a song which was to be performed by school children were inspired by your timeless song:

These words still express our collective view of the Wall, of our oppressors, and are still inspired by you. Do they still mean the same to you?

We appeal to your moral compass…

Consider that message received. Roger Waters will continue making an ass of himself and continue defiling the memory of one of the greatest rock bands of all time June 22 by performing “Dark Side of the Moon” in it’s entirety by himself to the delight of suicide bombers who planned to boycott the event all together rather than feign allegiance to his pious and delusional call for unity.

UPDATE: SUICIDE BOMBER KILLED 6 IN TEL AVIV - I guess we should blame Ticketmaster for that.

Posted by Stupid at 1:24 PM No comments: 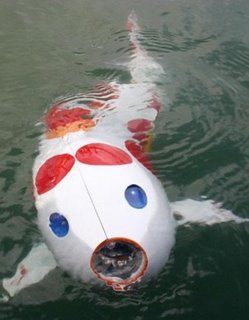 Ryomei Engineering (a subsidiary of Mitsubishi Heavy Industries), in cooperation with two other Hiroshima-area engineering companies, has developed a robot resembling a koi carp. The robot was demonstrated at a pond on the grounds of Hiroshima Machinery Works.

The robot is modeled after a Nishiki koi carp as a form of tribute to Hiroshima Castle (whose nickname Ri-jo means Koi Castle). The 80-cm (31-inch), 12-kg (26-pound) fish has a white body with bright red spots. Though the tail movement is very smooth and lifelike, the remote-controlled koi is capable of moves that a genuine koi is unable to perform, such as swimming in reverse and rotating in place.

The robot is Ryomei Engineering’s fifth in a line of fish robots that includes a sea bream, a prehistoric coelacanth, and a golden carp. New features added to the robotic koi include a CCD camera built into the head and sensors for analyzing water quality.

[technorati tags: priorities, TV, ]
Posted by Stupid at 1:55 AM No comments:

At our site you can have all of your electronic documents blessed with a blessing of your own choice, using our Holy Server.

Here at DigiBless we have decided that it is time to bring God into the virtual world, and so we provide this service free to believers all around the world. All we ask, is a small donation to enable us to continue to spread the word and blessings of Jesus Christ, Our Lord.

Posted by Stupid at 1:44 AM No comments:

Make Your Own Ice Cream In 30 Seconds (Using liquid nitrogen)

Tourists From The Planet Tharg

[technorati tags: tourists, planet, tharg, stupid]
Posted by Stupid at 12:36 AM No comments:

The makers of RU-21, the "miracle" hangover cure reputedly developed for Soviet spies, have developed a product to keep you drunk.

Spirit Sciences, which is based in California but has research facilities in Russia employing scientists who once worked on secret programmes for the Kremlin, have christened the new product RU-21 Red.

If you take a tablet you need less alcohol to stay drunk, they claim. Emil Chiabery, a co-founder of the company, told The Telegraph from his offices in Los Angeles: "I never drink and there's no personal story. But RU-21 Red prolongs drunkenness and enhances intoxication.''

RU-21, the company's original product, is sold as a natural dietary supplement in the US and Britain. It officially claims to help prevent long-term diseases associated with moderate alcohol intake.

But among its ingredients are acids that are natural anti-oxidants and reportedly rid the body of some of the harmful by-products of alcohol breakdown that lead to hangovers.

The new pill, which contains grapevine extracts intended to slow down the oxidation of alcohol and keep the user drunk, has been criticised. The weight of criticism means the company may now reconsider introducing it to the market.

Mr Chiabery, who was born in what was then the Soviet republic of Georgia, said: "I'm not sure I'm going to market it in the USA. I don't want it to become a party drug. We are for responsible drinking."

The company makes no secret of the fact that its hangover cure is aimed at party-goers anxious to avoid the debilitating morning-after effects of heavy drinking. The company sponsors concerts and pop groups.

The product, which is marketed with a video showing KGB types in the shadow of the Kremlin handing over a briefcase of money in exchange for the secret formula, earns hundreds of thousands of pounds a year in sales in the US.