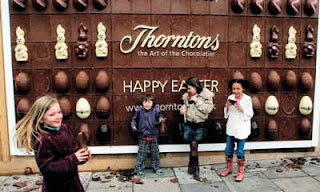 In London, Barry Colenso designed for Chocolatier Thorntons a giant 390kg (860lb) edible chocolate billboard for the Easter season. The billboard was constructed by a team of 10 chocolatiers who spent 300 hours putting it together using ten massive chocolate bunnies, 72 giant chocolate eggs, and 128 panels made of pure chocolate. The billboard lasted just three hours after the company invited passers-by to eat it.
Posted by Stupid at 11:15 AM